So, my son has requested a weighted blanket. I was sure I could make one as it was infinitely easier than many other projects I’ve taken on.

I spent some time reading tutorials and getting prepped.

My son wanted a full sized blanket to sleep with. That meant I needed to make something that would cover his whole body. I quickly eliminated the idea of constructing the blanket out of minky. Its way to stretchy and difficult to manage if I want anything like straight lines.  So, I decided to use sheets. I also felt that a 5″ block was too large and the beads would tend to fall too far away from body.  So, I reduced the block size to 3.5 inches. I followed the basic method to construct the blanket into columns that I can fill. The I did the math: (body weight * 10%) + 1 lb. I divided the total weight by the number of squares.

Don’t sew one end. Leave both the top and bottom of the column open. Sew a single center seam across the columns, sew twice. Then, fill from the center outward at each end. This is easier than trying to get the beads to travel the full column height. Again, work from the middle outward.

I carefully measured out 1 row of beads into 16 individual cups (the number of columns I had) and used a funnel to dump them into each spot. I created a “pin dam” to keep the beads in place. It kinda worked, but if a single bead escaped and got under my sewing foot…all progress stopped and I had to break the thread and deal with the escapee. So, it took too long. There had to be a better way. So, I stopped to see if I could come up with a better solution.

My mom is a machine embroiderer and she uses all kinds of stabilizers on the top, bottom and even sometimes within the piece. Some stay in the piece, some disappear with heat and some disappear after washing.   So, after a bit of searching online, I found a self-sticking but water soluble stabilizer.  I give you…Vilene Tacky. Here’s where I bought mine.

With each of my pockets being 3.5″, I found that I needed to cut my Vilene 3×5″.  I used a dull pin (yes! they have a purpose) to scratched the back. Then, I peeled off the backing. I gently folded it almost in half along the long edge and sealed the edge away from me (near my fingers). Then, I dumped the beads in and carefully finished sealing the packet. Its a lot like making wontons. I ended up having some unmatched edge that were still sticky. So, I used utility scissors to trim the Vilene to remove any sticky bits. 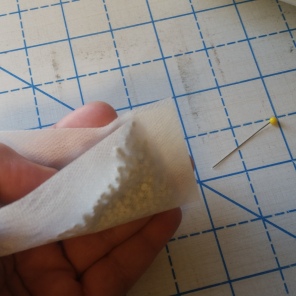 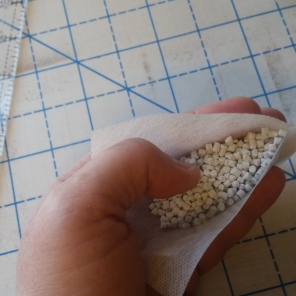 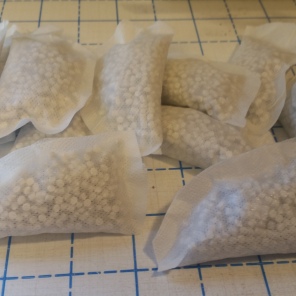 Then, I could just sit at my machine and dump each little packet into its pocket. I used a single pin to keep it from sliding out — although it was pretty easy to hold in place with my fingers. Then, I was able to stitch without the beads moving around and getting under my sewing foot. That was one less thing to manage with a very and increasingly heavy blanket trying to fall off my SewSteady table, sewing table, lap and chest. Yay.

I will say that I will never do this project again. It was so fiddly and frustrating.  I got so frustrated with it at one point that I had to set it aside for a bit. Honestly, managing a heavy blanket as it got filled and trying to sew was not worth it to my back. I enlisted my husband to help at multiple points.

Next time, I’ll just buy one. Specifically, these…

But, here’s the final project. I have not washed it yet, so it still has all my markings. I use Crayola washable marker.

For a child that will grow and get heavier, and thus need more weight over time, this pattern by (the incredible and very much missed) Nancy Zieman is brilliant. I made two of these for friends and we used sheets as weights. Much, much easier than these beads and the weight can be customized. You could even sew tubes of beads. Why did I forget about this when I took on the above method?

Where a Straight Line's a State of Mind

Film in the Fridge

The Crafty Mummy
Sewn Up

Sewing in a busy world